The story of Charlie Thomas’ family came full circle Friday night at the Northern Cherokee Nation’s naming ceremony.Held in the Memorial Garden at the annual Pow Wow, the naming ceremony … 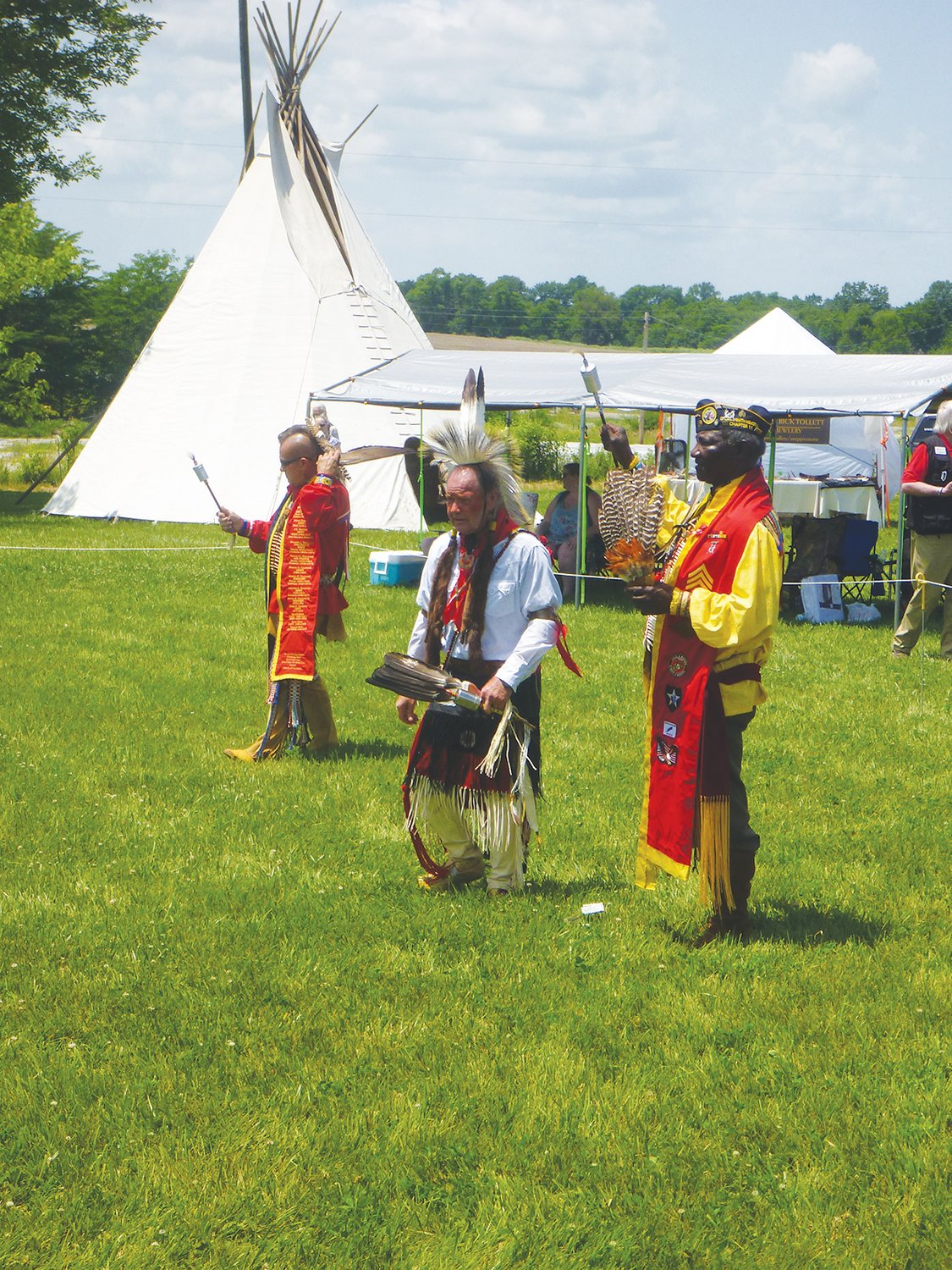 The story of Charlie Thomas’ family came full circle Friday night at the Northern Cherokee Nation’s naming ceremony.
Held in the Memorial Garden at the annual Pow Wow, the naming ceremony welcomes new members into the tribe. Charlie, who lives in Right City, MO, is descended from Cherokees on both his mother and father’s side, he said He grew up hearing about his great-great grandmother, who lived on a reservation in the Ozarks.
She had a Cherokee name, but was given an English name.
“One track of the Trail of Tears came through there and a group broke off,” Charlie said of why his ancestors ended up near Viburnum, Mo.
The Thomas family was one of several hundred people who attended this year’s Pow Wow at the Northern Cherokee Nation (NCN) Cultural Center, east of Clinton. Many are descendants of people who were forcibly relocated to the Midwest during the l800s, surviving the Trail of Tears. They gathered for the tribe’s 27th annual Pow Wow at the Cherokee Cultural Center since the center was built in 1995.
They come from every surrounding state, according to Chief Gray Elk, but mainly from Oklahoma and Arkansas. That’s where large numbers of Cherokee moved in 1845 when Missouri made it illegal to be an “Indian at large” in the state, he said. They moved back in 1898, when the railroads were built.
Chief Gray Elk grew up in the Missouri town of Chilhowee, which means “our town” in Cherokee. About half the town’s population was Cherokee when he was growing up, he said. At the Cultural Center, an entire wall of file cabinets holds genealogical records for 1,500 families, each file representing a branch of a family.
Anyone who is related to one of those families or who can prove through other records that they have Cherokee ancestry is eligible to join the tribe, the Chief said.
“You go on a big hunt,” he said.
Chief Gray Elk was one of 13 veterans who participated in the Gourd Dance Friday night and again on Saturday afternoon. Veterans are considered tribal warriors, inheritors of the role of men who go into battle to protect the tribe. Now, they include both men and women veterans or relatives of veterans. For the dance, they wear regalia, and carry a fan of eagle feathers and a gourd rattle.
The Gourd Dance at this year’s gathering was lead by Jim Binkley, from Jonesboro, Ark. Dancers enter the sacred ring to the beat of drums, then circle the ring, step dancing and shaking small gourd rattles. Further sets of the dance, Chief Gray Wolf explained, represent the dancers searching for their enemies. How many sets they perform depends on their endurance.
“We dance until we fall down,” Binkley noted. “It’s just like basic training — all over again.”
Also in the Gourd Dance were Eddie Beasley of Edmond, Ok., Abraham Clark from Springfield, Mo., Jason Thigpen from Memphis, Tenn., Daniel White Crow, deputy chief of the NCN and Bill Cantrell. Little Wing Strong Woman, a veteran of 20 years, said she was dancing for the five comrades she lost in Felucia, Iraq.
Guests from other tribes participating in the dance included Robin Figuero (Star Bear) from Louisiana. Inauquan Lone White Eagle, from Little Rock, was dancing as a War Mother, and Running Wolf from California was the warrior guard.
The Cherokee Nation is a clan system and matriarchal — members trace their heritage through the female side of the family. Chief Gray Elk recalled Wilma Mankiller, the first female chief, and Ida Mae Brown, who interviewed the last native speaker in a past century and recorded the interview, preserving the language.
Chief Gray Elk is now one of 1,200 Cherokee speakers, and speaks several dialects. He has compiled a Cherokee language dictionary in two large volumes. He has also compiled a collection of legends, and translated the old clan ceremonies. The Northern Cherokee Nation is the only state-recognized tribe in Missouri, but does not receive any state or federal funding. The Pow Wow is free and open to the public.
It was through Beth Thomas, Charlie’s spouse, that Charlie and his family became reconnected to his Cherokee heritage. Beth worked as dispatcher and Chief Gray Elk was one of her drivers, she said.
The chief chooses the new members’ Cherokee names after reading their applications which list their interests. Charlie received the name Horse Walker, and their daughter became Spotted Pony. The family has horses, he explained.
Their son, who likes the outdoors and hunting, was named Red Oak. Beth will be adopted later by the tribe, she said.
The administrative office of the NCN is in Cuba, Mo. The Tribal Complex is at 5790 E. Hwy.7, Clinton, Mo 64735. The NCN is dedicated to “Remembering Our Past, Preserving Our Future, Planning Our Destiny.”