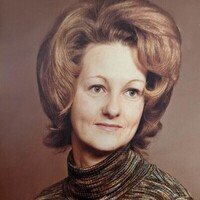 Suzanne Jean Scott, age 76, of Deepwater, Missouri passed away on Saturday, April 16, 2022 at Menorah Medical Center, Overland Park, Kansas surrounded by family.
Suzanne Jean Claypool Scott was born in Chicago, Illinois on June 30th, 1945 as the oldest of Leslie Wayne Claypool and Doris Jean Blank Claypool’s four children.
At a young age, she, her parents, and her siblings moved from Chicago to Deepwater, Missouri. Her siblings included Leslie Wayne Jr., Diane Marie, and Roxanne Irene. Suzanne met Shelby Jay Scott on a double date in Clinton, Missouri and they were married in March of 1962. Together they had four children, Sharol Jeanne, Shelley Jo, Stacey Jill, and Shannon Jay.
They raised their family in Lees Summit, Missouri for 20 years. They all have fond memories of weekend trips to Deepwater and Calhoun, where all the kids rode there and back piled in the bed of Shelby’s truck.
She was a stay-at-home mother for her kids and worked part-time as a school bus driver. Later, she worked full-time as a secretary at the Grandview Fire Department. After her children were grown, she eventually returned to Deepwater, Missouri to work in banking and retired as a home health care giver.
Suzanne had the special ability to always make you feel loved and welcome when you were around her. She had a close companion in her dog Jake, who she loved dearly. Many days were spent drinking coffee, reading, playing spider solitaire, recording movies to her DVR, and tending to her plants and her critters (or as she would say, “pot lickers”).
She was preceded in death by her father Leslie, mother Doris, her brother Wayne, sister Diane and daughter Stacey.
Suzanne leaves behind so many people that she loves, but will one day embrace again in a better place. Of these people are her children Sharol (Manuel) Gutierrez, Shelley (Russell) Tucker, and Shannon (Christine) Scott, her sister Roxanne, and grandchildren by oldest… Vincent, Brooke (Zane), Stephan, Nick, Molly, Jackson, Emily, and step-grandchildren Brittani and Hillary. As well as her great-grandchildren Harper Mae and Carson Jay. She was adored by many nieces, nephews, cousins, and too many friends to name.
Funeral services were held April 23, 2022 at the Vansant-Mills Chapel, Clinton with Rev. David Mills officiating. Special music included "Only Jesus, Hallelujah and You Say." The casket bearers were Shannon Scott, Manual Gutierrez, Nick Tucker, Tim Prescott, Russell Tucker and Jackson Tucker. Zane Riggs, Travis Claypool, Vincent Gutierrez, Tony Claypool, Cody Holt and Stephen Gutierrez were honorary bearers. Interment was in Iconium Cemetery, Iconium, Missouri.
Services were under the direction of Vansant-Mills Funeral Home of Clinton, Missouri.