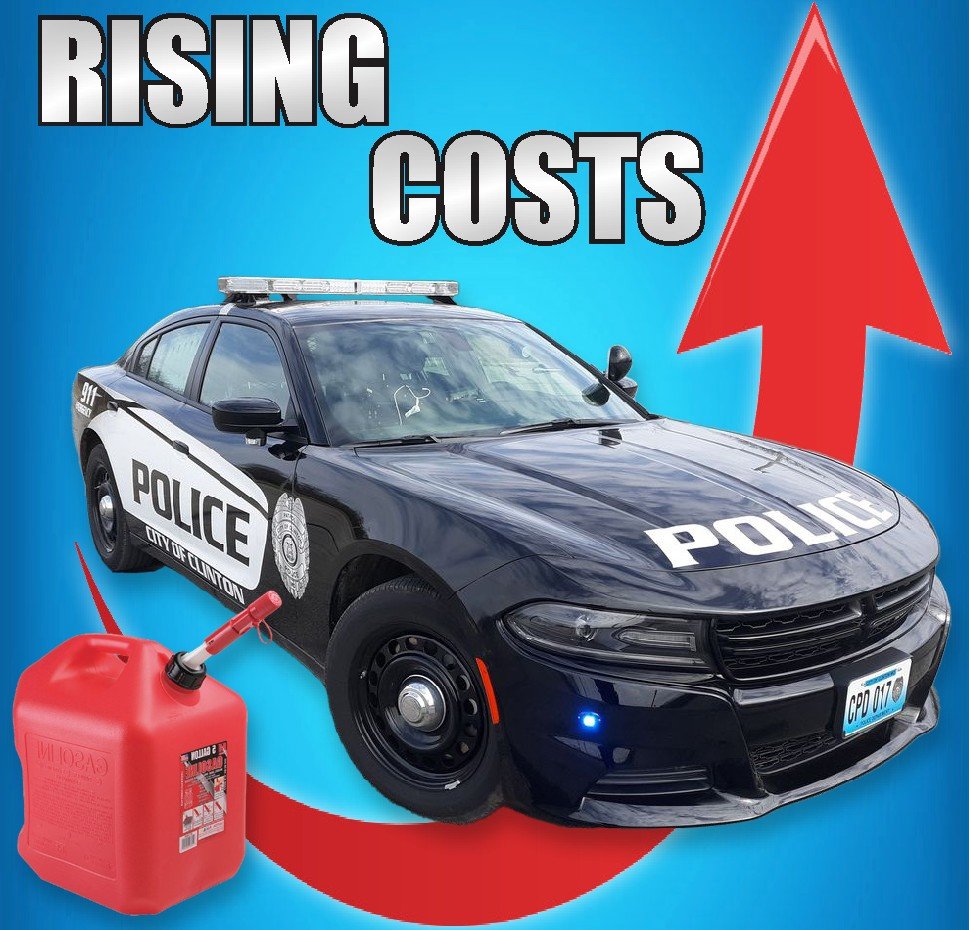 AS GAS PRICES CONTINUE TO SURGE, the impact also strikes at the heart of city and county budgets, and moreso, law enforcement and first responder agencies.
Posted Friday, June 24, 2022 11:16 am
Judy Kramer

A year ago the average price for a gallon of gas in Missouri was $2.749, according to www.missourigasprices.com. On June 20, 2022, the Missouri average was $4.689 and the national average was $4.988, according to www.gasbuddy.com. Henry County and Clinton government agencies are “feeling the pain,” and are trying out creative ways to keep their fleets of vehicles on the road.
Henry County Commissioner Jim Stone said that Road and Bridge employees have been put on four 10-hour days, and they try to get their work completed by using one truck. However, he said that off-days are a problem because sometimes things happen that have to be taken care of and the crews are traveling when they had not planned to.
“Maybe we can get by this summer,” said Commissioner Stone. “We will look at the budget at the end of this month and we can make changes if we have to. Back in the 1980s we had high prices but nothing this high. It is hard on all of us. We have been frugal, but sales taxes have dropped and lowered our revenue. It is quite a job now. Like your house or businesses you have to do the best you can.”
Clinton City Administrator Christy Maggi said that the City is currently absorbing the cost of high fuel prices, and she hopes there will be an end in sight.
“We have not taken any major steps,” said Maggi. “We have had discussions about not driving and if you can curtail mileage, do that. We need to continue mowing places such as the cemetery. We will start budget discussions. When the Fire Department gets calls, they get calls and you have to live with it. We try to curtail other ways.”
Clinton Fire Department Chief Mark Manual said that the department responds to every call and is seeing a big rise in fuel cost. He said that they are over budget on fuel.
Cities and counties around the nation have been in the news about how they are coping with the fuel prices. www.wxyz.com reported on June 13 that the Sheriff in Oakland County, Michigan, instructed the deputies to attempt to manage whatever calls are acceptable over the phone. He said that this would be not-in-progress calls, non-life-threatening calls, or calls that do not require evidence collection or documentation. Deputies continue to provide patrols to all areas in the county.
www.13abc.com reported in March that Sheriff Mark Wasylyshyn, of Wood County, Ohio, said that the high prices of gas have caused the Sheriff’s Department to look into more efficient options.
“The hybrids get 20 to 30 percent better fuel economy than their predecessors do,” said Sheriff Wasylyshyn.
Also in March, https://nypost.com reported that owners of a Chevron gas station near Spring, Texas realized they were short of hundreds of gallons of gas. The Harris County Precinct 4 Constable’s Office reported that surveillance video shows several heavy-duty pickup trucks stealing 1,754 gallons of diesel fuel worth $8,331.50. Apparently, the thieves used a fuel bypass device.
NPR reported on June 20 that President Biden said he’s considering a federal holiday on the gasoline tax, possibly saving as much as 18.4 cents a gallon. NPR also reported that the Biden administration has already released oil from the U.S. strategic reserve and increased ethanol blending for the summer.