The 11-6 Lady Cardinal soccer team traveled to Pleasant Hill on Tuesday, April 26 to take on the 10-4 Chicks. Even though the Cardinals have been playing very good … 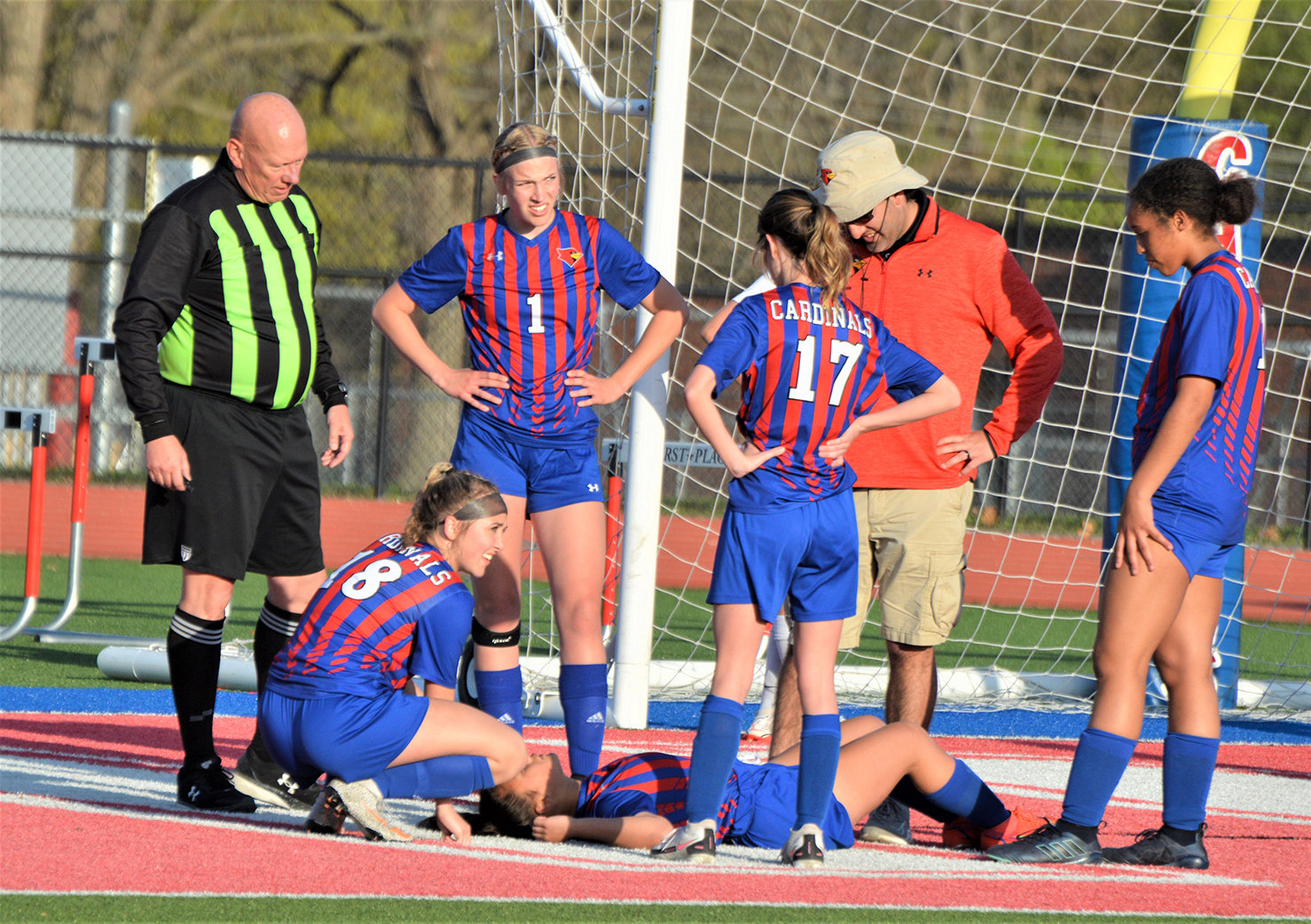 THE LADY CARDS Mia Bagley (on the ground) gets some attention as she recovers from a hard tackle in recent competition. L to R, Kylie Williamson, Kinzlie Hager, Raylen Richman and Coach Adams offer their support. These tough young ladies are close to making history by being the first Lady Cardinal soccer team to have a winning season.
Posted Thursday, May 5, 2022 10:37 am

The 11-6 Lady Cardinal soccer team traveled to Pleasant Hill on Tuesday, April 26 to take on the 10-4 Chicks. Even though the Cardinals have been playing very good soccer most knew the Chicks are always a challenge. It would take a near perfect game to stay with them. It did not happen.
Skyte Wilson did not travel with the team, but Haleigh Richman was back in the lineup. The Cards are very athletic and can stay with a more experienced club for a time.
But, the Chicks had the upper hand and the majority of the ball possession. The Chicks scored early 1-0. Their attacks were fast and frequent. The Chicks went up 2-0. Pleasant Hill got an own goal as the Lady Cards were defending a corner kick. The Chicks went up 3-0 and the game was getting away from the Lady Cards. In the last minute of the first half Kinzlie Hager took a corner kick, Allie Cardwell got her head on it and Mercedez Brown finished the attack making it 3-1 at the half.
The Cards fought hard in the second half but as they tired, the Chicks added two more goals to win 5-1.
The Cards get back at it on Thursday as they travel to Marshall to take on the 10-5 Owls.

The Lady Cards, playing at Marshall, on Thursday, April 28, were trying to rebound from a recent 5-1 loss to conference rivals Pleasant Hill.
Playing the 10-5 Marshall Owls, the Lady Cards started with clean ball control and a majority of the possession.
The Owls fought off the Cardinal attacks until 3:37 left in the first half. Kinzlie Hager fed a nice ball to Skyte Wilson who took care of business making it 1-0 Cards at the half.
The second half was much the same with the Cards controlling the pace of the game, but with little luck finding the net. Finally, Allie Cardwell crossed a ball to Mercedez Brown who beat the Marshall goalie.
The game ended 2-0 Lady Cards.
The Lady Cards are now 12-7 and, by press time, will have traveled to play the 6-7 Excelsior Springs Lady Tigers on Tuesday, May 3.