The Baseball Cards traveled to Odessa on Tuesday, April 26 to take on the 5-8 Bulldogs. The final score, 13-7 in favor of Odessa, did not reflect that both teams collected … 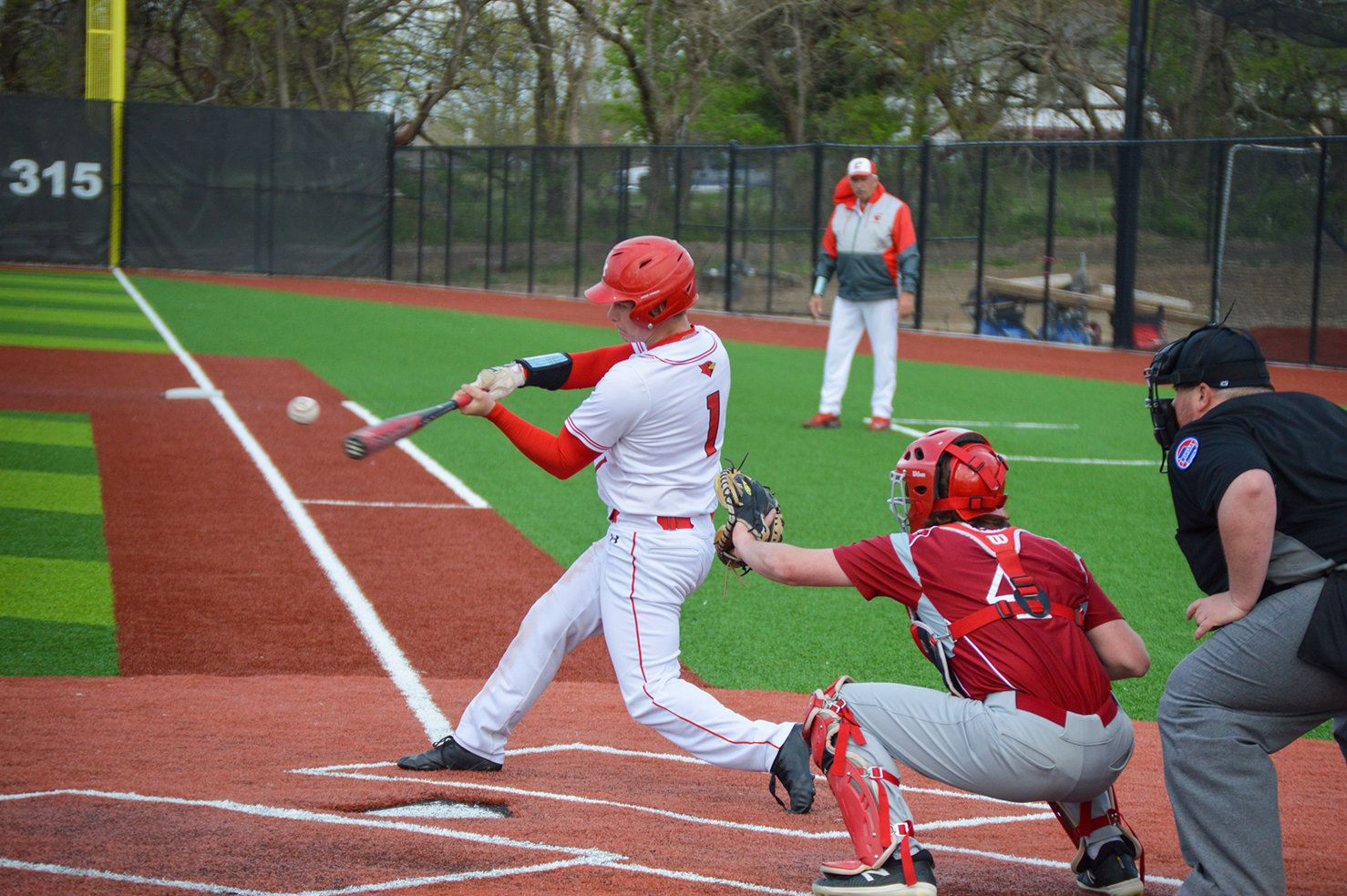 CARDINALS senior Anthony Gumminger smacked three hits to lead the Cardinals, but the Cardinals could not overcome their defensive miscues against Warrensburg on Thursday night.
Posted Thursday, May 5, 2022 10:31 am
Tim Komer

The Baseball Cards traveled to Odessa on Tuesday, April 26 to take on the 5-8 Bulldogs.
The final score, 13-7 in favor of Odessa, did not reflect that both teams collected the same number of hits, 12. Also, the Cards only gave up three walks, the Bulldogs two. It was the same in the error department, both teams committed three. The difference came in the timing of the hits and the timing of the errors.
The Cards had six RBIs to the Bulldogs nine. The Cards executed three stolen bases, the Bulldogs two.
Anthony Gumminger was back in the lineup and got a hit, scored a run and stole two bases for his team.
Paul Shields took the loss for the Cards. He pitched two-thirds of an inning allowing six hits and seven runs. His season record fell to 1-2. Shields got relief help from Gage Mantonya.
Tyler Gardner, Shields, Westin Komer and Mantonya all had multiple hits for the Cardinals. Gardner went 3-for-4 at the plate.
The Cards’ record now stands at 8-12 with six games left in the regular season. The Cards will play the 9-6 Warrensburg Tigers on Thursday.
Individual Stats: Shields (4,1,2,0,0), Gumminger (4,1,1,0,0), Gardner (4,3,3,0,0), Mantonya (3,1,2,3,0), McGuire (4,0,1,2,0), Komer (4,0,2,1,0), Collins (3,0,0,0,1), Wirsig (4,1,1,0,0),
Team (33,7,12,6,2) with 8 SO.

The game between the Cardinals and the Warrensburg Tigers was moved to the Warrensburg turf field on Thursday, April 28.
It was a bit of a slugfest with both teams getting 11 hits, but unfortunately the Cards had one too many errors (8 total) and the Tigers came out on top 15-10.
Gage Mantonya took the loss for the Cardinals with his record falling to 3-3. He got relief help from Jake Wirsig.
The Cards, down 11-3, had a big inning scoring seven runs in the bottom of the fourth making it an 11-10 ballgame. The Tigers added two in the fifth and sixth inning.
The Tigers brought in their big hard-throwing left hander and the Cardinal hitters could not catch up with him. The final score was 14-10 Tigers.
The Cardinals getting multiple hits were Anthony Gumminger, Westin Komer, Jake Wirsig, and Paul Shields. Gumminger led Clinton with three hits in four at-bats.
Both Shields and Gumminger made outstanding sliding catches in the outfield.
The Cards fall to 8-13. They were to play Sherwood on Friday, April 29, but it was rained out.