Like most people at Parks Chapel Homecoming, Larry Terry remembers when he was converted to Christianity. The year was 1961, and he was at a tent revival where he answered the altar call. A … 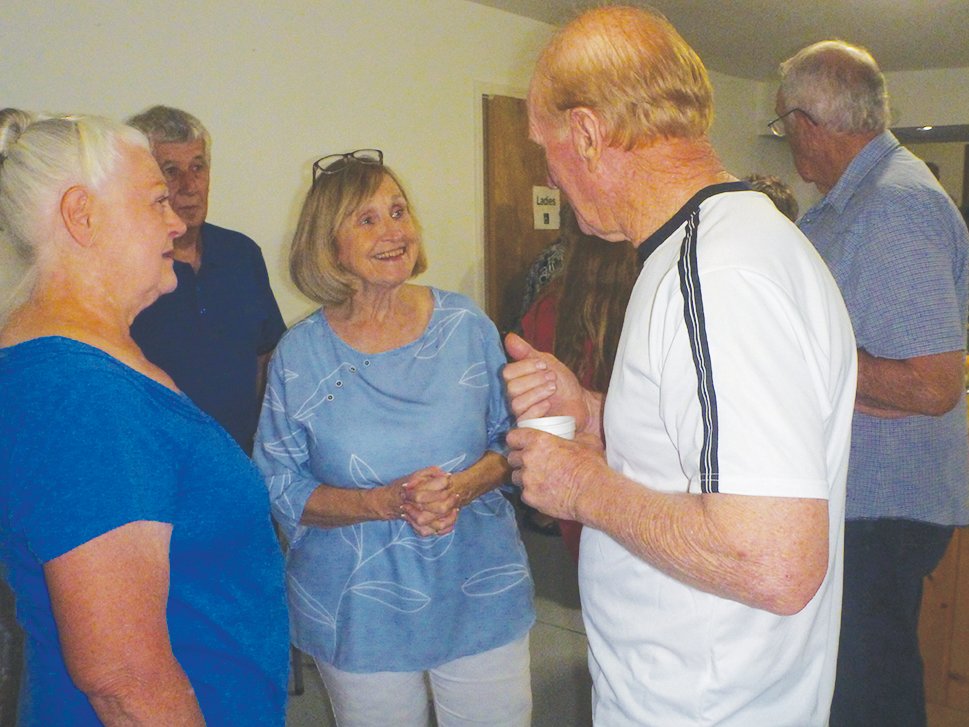 Like most people at Parks Chapel Homecoming, Larry Terry remembers when he was converted to Christianity. The year was 1961, and he was at a tent revival where he answered the altar call. A rockabilly guitarist, Larry had left home after graduating from Windsor High School in 1959 to pursue his dream: a recording career in St. Louis.
He formed a band, but when he did not turn out to be the next Elvis, he returned to his home near Tightwad, down the road from Parks Chapel.
“It changed my life,” Larry said of the church revival.
On Sunday, June 5, Parks Chapel celebrated 70 years of changing people’s lives with a Homecoming service. Brother Brad Elmer, a former pastor, brought the message.
“We are celebrating a platinum jubilee,” he said. “Queen Elizabeth doesn’t have anything on us.”
Cherie and Randy Howell led a rousing rendition of the opening Hymn, “Victory in Jesus,” which ends with the line, “He plunged me to victory beneath the cleansing flood.” But for Parks Chapel, the watershed event was a tornado that struck in 1946, knocking the first church building on the site off its foundations.
That building was constructed in the 1890s, after Susan Parks donated six acres for a church and cemetery. Her only stipulation: that the church be used for Universalist services once a month. Pastor Randy Hargis said in his synopsis of church history that it was also used for Baptist and Presbyterian congregations.
By 1924, the building was only used for funerals at the adjacent cemetery and fell into disrepair. By 1950, it was virtually abandoned.
At Sunday’s potluck, Merle Fowler Howell, a 60-year member of Good Hope Baptist Church, recalled the day in 1950 when Brother C.J. Ford came to Good Hope and asked if the congregation would take on the chapel as a mission project. Good Hope accepted the challenge and became the mother church.
Merle and her friends agreed to go to the chapel on Sunday afternoons for Bible classes, held in the damaged building, which was propped up with poles but listed to one side. Services were eventually moved to the Turner Schoolhouse for safety reasons.
More than 100 people contributed to the building fund, Hargis said, raising $336.60 to build a new church on the site after the damaged building was razed. Raymond Rukes, the chapel’s first pastor, enlisted members of Clinton’s First Baptist Church to help with construction.
Parks Chapel Baptist Church counts its anniversaries from August of 1951, Hargis said, when it was accepted into the Tebo Association of Southern Baptist Churches. It holds a Homecoming celebration every 10 years.
Former celebrations marked additions to the church auditorium. Martha Brown Crouch recalled that her father donated trees on their property to complete the two back classrooms. The trees were taken to the saw mill owned by Bill Albin, the uncle of Mick Albin, who was at Homecoming.
The 50th anniversary was celebrated in 2001. In 2011, Homecoming commemorated the completion of the fellowship hall.
At the potluck preceding the service, Martha recalled the Christmas pageants and the red-and-green popcorn balls that Don Williams’ mother made for the cast party. She also remembers being baptized in the pond on Bill Houk’s property.
“We had just had a revival, a combined tent revival held by Tebo, Parks Chapel and Good Hope,” she said. “There were a bunch of us.”
People were also baptized in the Osage River, she said. An inside baptistry was added to the auditorium in 2006. The 70th Homecoming service would have been held last year, Hargis said, but was postponed because of Covid.
Winnie Scott Tuckness, from Springfield, gave the blessing at the potluck. Her father, Durwood Scott, was pastor of Parks Chapel when she was a teenager.
“Telling people about Jesus was what he lived for,” she said.
It was Pastor Scott who ancouraged Larry Terry to accept Jesus into his life after the musician returned home.
“He said, ‘You can use that guitar to play gospel,’”Larry said.
Through the church, Larry met his future spouse, Judy, a pianist who offered to teach him some Christian music. The couple were the music directors at the Chapel for 10 years, he said.
“I made a change,” Larry said. “I appreciate the role Parks Chapel played in bringing that change.”
Other testimonies were given by members, current and former, who cited examples of how Parks Chapel became a beacon of light for those who lived around it. Martha recalled when there were 150 people at a service. Don Williams remembered Dave Hill’s Sunday School class for boys, and the day he and two other boys received Bibles for six months of perfect attendance.
“It has had years of growth, and years that were not as good,” Pastor Randy said of the chapel “It’s going great now.”
Brad Elmer, who was a classmate of Pastor Randy at Lakeland Schools, said Parks Chapel changed his life when he went on its mission trip to Thailand in 2006. He left Parks Chapel to start Haven of Hope in Blairstown (Mo.). Parks Chapel helped sponsor Haven of Hope, he said.
Brad noted that the basement would be deeper, but the church is sitting on bedrock. He urged the chapel members to press on.
“The future is bright,” he said.” Parks Chapel will be a beacon of hope in a world of darkness.
“We are standing on the Rock of Ages.”
It was a Canadian who brought Larry’s music into a new century by putting it on the Internet. The man also nominated him for the Rockabilly Hall of Fame. Larry didn’t get into the Hall of Fame, he said, but he did get on the Internet. To hear a recording of “Hep Cat” by Larry Terry and his Hep Cats, go to Youtube.
To see a video of the Homecoming Service at Parks Chapel Baptist Church, go to its Facebook page.
The church is located at 1023 SE 450th Rd, Clinton, MO 64735, off of Highway 7 South, between Coal and Tightwad. Follow signs to the church from Highway 7 and S. E. 350.